The annual Silvesterlauf (8,6km city sprint) brought a lot of spice to my trainings. The combination of fast elements in my runs – making me faster for this race – and the endurance units in deep snow was great. So I was in a good shape last sunday and fully motivated to suffer for the hot deal: a very special dinner. Like a young kicking pony i was finding my way to my starting box on the left side in the first row and giving our newcomer the greatest of all hints: you will be anyway too fast when running with the mass, don’t hurry and then turn up after the first round. It will pay out.

START. It felt a bit like in the washing machine during the water start of a triathlon. Pushing on the left, behind, on the right … just forward. First right over the bridge, then with speed down towards the turn to the left on the inner side of the field. Just in the moment when I was turning into the curb – standing on my left leg – a mixture of a pit bull and a Lilliputian with a chili in his back was squeezing it’s body through the narrow space between me and the balustrade … KLICK was the sound in my knee. No serious hurt. So go on. What am I doing here? With a view on my watch I was following the field down the Limmatquai … 3:20 on the watch. SLOW down, go easier. It felt a bit like the ride in July on Superman, the newest coaster at Six Flags Mountain. By far too fast, I was somehow swimming in the field like a piece of driftwood. Then up, down, left, right, left, left, left. More and more I was o focussed on the left turns as my knee began to tell me, slow down, run smoother. First round: 3:40 min/km. You’re mad I thought and decreased the speed to a 4 min/km pace for the second round. Somewhere between km 3 and 4 I had to leave the course as my knee began to hurt seriously. “Crazy old guy, you shouldn’t go to fun football tournaments anymore.”

Two days later. My knee is a nice bit bigger than last saturday. The X-ray didn’t show something seriously damaged and if there is no bad surprise in tomorrows MRI picture I can re-start softly on the bike. Which will also help to work the water out of the joint. The positive side is: plenty of time for the family over Christmas.

Learnings? There is an age when the smart guys are running with their better halves in the fun groups along the christmas lights through the romantic city or just doing christmas shopping with the family. But … it was awesome for the 15 seconds. I felt like a 16 years old till the pitbull was pushing me on the side. Next time I’ll take a slice of sausage with me and throw it over the bridge. 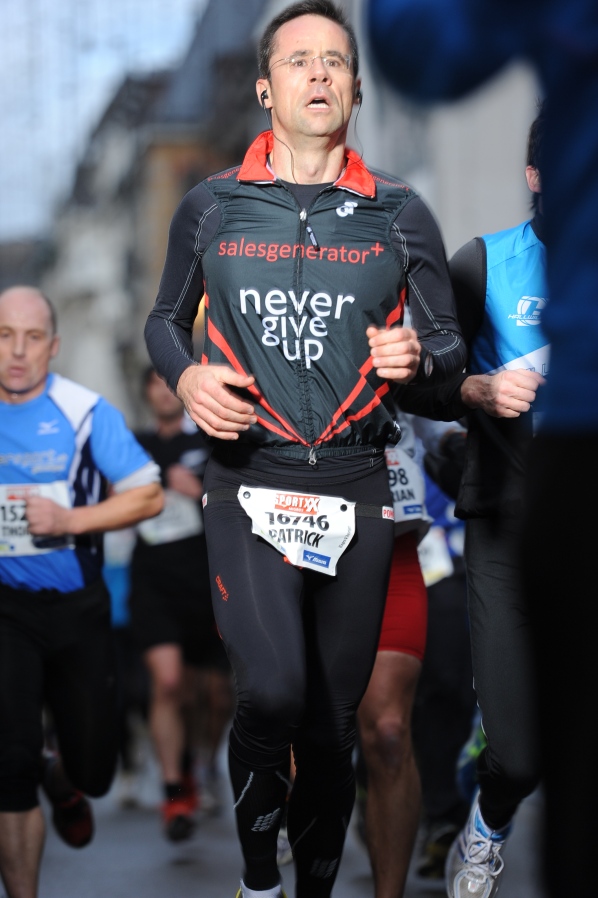