I‘m sitting here in a tiny airplane seat sour and hard legs from my yesterdays first marathon experience. I‘ve already finished duathlons or triathlons that took me more than double of the time and suffering than yesterdays race. And yes, I was a bit smiling about these marathon (only) runners. But I have to admit that running a marathon is a hard pice of work as you‘re running from 100 to zero.

It was the right moment for running my first marathon as my next years adventure is coming closer. The chance to bring in all these experiences in my training plans for the next weeks and months. And the right place, running the first one over the Golden Gate bridge in San Francisco in partly warm and sunny California.

My preparation for this race was really poor. With a fast and chaotic jump  from finishing business into long family hollidays – a combination of my sons 5-day Karate turnament and a 2‘000 miles ride across California  – the last training days were not ideal but spectacular. Or did you ever run on 1‘400m above sea level at 7 in the evening with almost 40°C in town with 11 churches, 9 national fast food chains and at least two sports shops selling guns? America, America …

So I ended up on last Sunday morning at 5:30 with a cliff bar, a winforce hazelnut gel and two bidons of winforce in my stomache at the start of the SF Wipro Marathon celebrating it‘s 75th anniversary. The guy who shared the cab with me said: „I was running a part of it a few days ago, you‘ll have fun out there. I‘m telling you it‘s awesome …“ America, America, a boys choir was singing the hymn of America … awesome … and then our wave was starting, running out in the dark for a finish time below 3 hours and 30 minutes. So did I.

First of all it was entertainment at it‘s best. A few miles after the start there was a big green field with about a 200m long gallery of 50x50cm big picutures of marines died in Iraq war. America, America … Maybe some of the runners around me had time for a minute of stillness … I did not. The fog was so wet, it was like rain. I tried to follow my heartbeat – the target was about 10 beats below my threshold – which wasn‘t easy to hold in the ascent up to the bridge and all the others lighter and harder uphills. Up and down. Left and right, from block to block. Awesome … as all the other pictures I‘ve collected on this early morning ride … 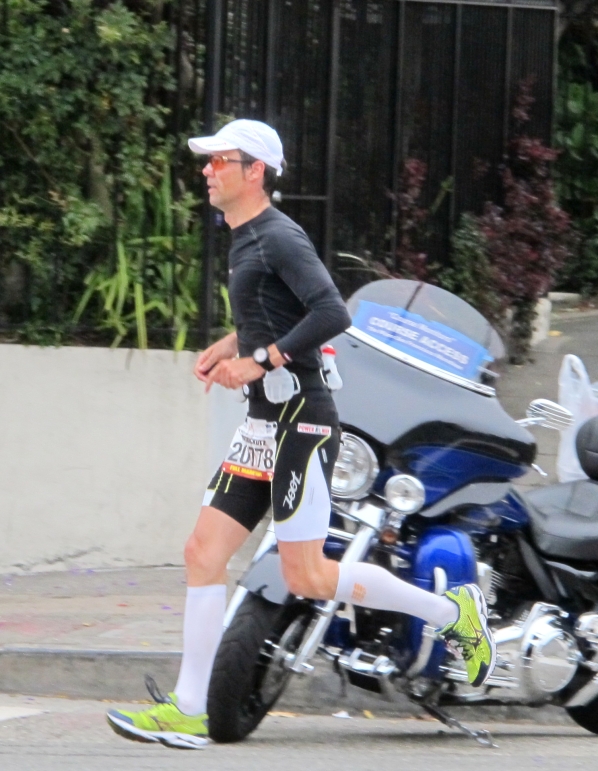 Imagine a temperature of approx. 15°C and a humidity equal to rain … and then there he was, this black haired guy in black barefoot running shoes with black socks over a black compression leggins under a wide surfer-like black shorts and a black, thick pullover of lamb wool with a banana in his right hand, later in his left hand. He was one of these crazy half-marathon participants entertaining us on the first half of the marathon. Another one was wearing a very, very short swim slip. No shoes. Just the slip on his tipically britain-read-head wobbly white skin. And there was that guy that has built up a beer stand looking like the official „hydration stations“. Or the more than 10 yellow clothed crazy chicks, chearing, screaming and jumping with their boards from „what about a rest“, „what about a coffee“ till „what about my phone number“. I‘m sure they knew that none of the participants brains was able to memorize the phone number or their faces after mile 20. So was my brain miscalculating when I realized that a sub 3:30 was in reach and I was calculating that I could go a bit slower, enjoying the last 2 kilometers … not miles. By far too late I‘ve realised that my brain didn‘t work properly after more than 40km.

3:30:26 was on my watch at 9 in the morning when I was crossing the finish line. More than I expected after these weeks and a really hard course. I was cramping on the last third as my muscles where not used to run that long and the downhills and high curbs were even harder to take for my achilles than the uphills. I was so happy to reach this line. Perfect nutrition, a clear head and running my own rhythm helped me to finish this thing so strong.

After all I got this medal of honor handed by a female marine. Unfortunately she didn’t want to kiss, maybe it was my perfume.

And last but not least there are some good experiences about nutrition – I have tested the Winforce Booster in training and during the race – I‘d like to share in the next few days. And there are some thoughts about my latest long-term target 2020 in the US. An inspiration I‘m bringing home from this awesome journey.